Why Genetic Testing Is Important 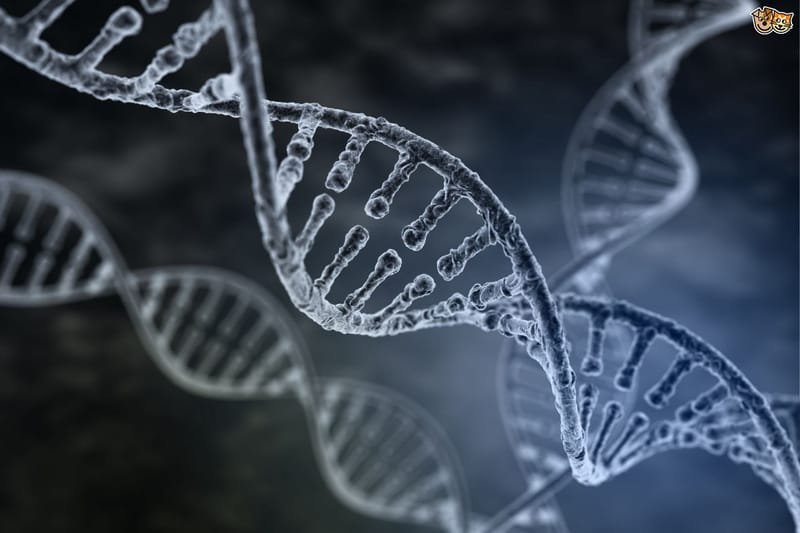 -DNA GENETIC DISORDERS WE TEST FOR-

Degenerative myelopathy (DM) is a progressive disease of the spinal cord in older dogs. The disease has an insidious onset typically between 8 and 14 years of age. It begins with a loss of coordination (ataxia) in the hind limbs. The affected dog will wobble when walking, knuckle over or drag the feet.

Hereditary Nasal Parakeratosis (HNPK) is an inherited autosomal recessive disorder in Labrador Retrievers. ... Because HNPK is a recessive disorder, a dog must have two copies of the mutation in order for the disease to manifest.

Progressive retinal atrophy (PRA) is a group of genetic diseases seen in certain breeds of dogs and, more rarely, cats. Similar to retinitis pigmentosa in humans, it is characterized by the bilateraldegeneration of the retina, causing progressive vision loss culminating in blindness.

Skeletal Dysplasia 2 (SD2) is the medical term for what many people refer to as dwarfism. It's an umbrella term that includes hundreds of conditions that can affect your child's bone and cartilage growth. Types of skeletal dysplasia are generally classified by which parts of the skeleton are involved.

Most DNA tested dogs can be used responsibly in a breeding program, but the decisions you make when choosing which dogs to mate must be informed and carefully planned.

Before looking at the breeding advice below, it is important to know which type of DNA test you have used, or are considering using. There are currently three different types of DNA tests available:

An autosomal-recessive condition means that a dog must inherit two copies of an abnormal gene before its health is affected. Each dog inherits one copy of a gene from its mother and one from its father. If the health status of both sire and dam are known, the likely health status of any puppies produced can be predicted. This means that any dog can be used responsibly in a breeding programme without the risk of producing clinically affected puppies, provided that the right mate is selected. Dogs that have been tested for an autosomal-recessive condition can be described as either: clear, carrier or affected, but what do these terms mean?

The dog does not have any copies of the abnormal gene associated with the condition you have tested for. The dog will not be clinically affected by the disorder and will only pass on a normal copy of the gene to any offspring. Clear dogs can be mated to any dogs without producing affected puppies.

The dog has two copies of the abnormal gene associated with the condition you have tested for. The dog will be clinically affected by the disorder and will pass one copy of the abnormal gene on to any potential offspring. Affected dogs can only be mated to clear dogs without risking producing affected puppies, however all resulting puppies will be carriers. Mating an affected dog to a carrier, or another affected dog is putting the health of future puppies at risk. 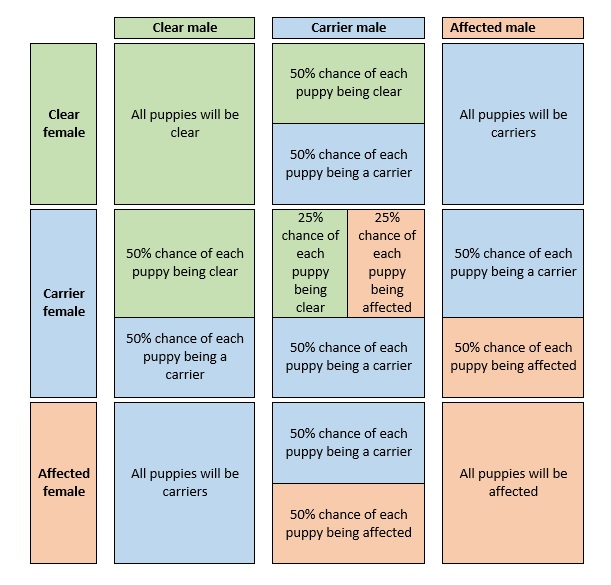 Producing affected puppies that will develop the condition you tested for will have a serious impact on canine health and welfare. A mating which may produce affected puppies should never knowingly be carried out. If this mating accidentally occurs, it is important to test all of the puppies before they are bred from or are passed on to new homes. Veterinary advice should be sought as to the clinical management of any affected puppies.